What a busy week.

Last Wednesday saw six Helsby members do the Dinas Bran fell race. I’m unable to find any results at the moment so if someone can find them please let me know. Presumably they will appear on the Dinas Bran School website shortly. Adrian has sent me a text saying that the runners were Mario, Adrian, Tom, Vanessa and Janet and Paul Foster. Hopefully more details to follow!

Saturday morning showed off the class in Helsby at the moment with two in the top three.  Colin Bishop storming first in a new PB in 17.47 was swiftly followed by Colin Thompson in 3rd in a fantastic time of 18.11 (not yet shown on the results). Some other fantastic results and PB’s on the day can be seen in the full results here

Congratulations to all who ran so well.

Saturday was the Helsby organised Sandstone Trail Challenge. Great stuff once again from Andy and all the helpers to pull off a brilliant event.

Full results already on the Helsby webpage and well done to Gareth Boyd and Steve Riley romping home for identical times of 6.06 for 36th and 37th (hope that wasn’t a sprint finish :d ) and especially to Ian Hilditch securing a new v70 record for 101st place in 8.50 and to Betty Grieve who completed the long distance challenge in 9.44 for 120th. Hope i’ve not missed anyone? Congratulations also to this year’s winner Dave Douglas.

Photos from Ben Williams for the Sandstone Trail Challenge

Also on Saturday saw Chris Baynham-Hughes do battle with another tough ultra, the Transvulcania

I’m sure Chris will update his blog about this race shortly but news straight from Chris is that he was 179th out of 1600, struggled a bit with the heat and had a drip at the end! One tough cookie.

Sunday was the Chester Half Marathon. I’ve had a couple of reports from this race and hopefully a photo of Clare, Roy and Tom will follow on the blog.

Some words from Ben “Although I didn’t get a PB it’s an awesome race now – very well organised, nice flat course (apart from the end…) and plenty of support around.”

And words from Ed “Conditions were pretty perfect for running on Sunday for the Chester Half, the foreast wind only turned out to be a light breeze. I arrived at 7:30 for 9:00 start as recommended in the race booklet and only had a five minute wait to get into the racecourse for parking, I suspect it would have been longer for those arriving later but there was also the option of Park and Ride with extra services laid on.

This was my second running of Chester Half and my first on the new course.  The race has expanded to 6,500 runners (according to the announcer) now, but didn’t feel too big at all.  The start was also on the racecourse and it was easy enough to start near the front if you wanted to.  There as a fun run for the kids which started next to the main start and at the same time, which must have been a great experience for them, and didn’t get in the way of the main race at all.

The race starts by going up to Fountains Roundabout, the along Parkgate Road for around 6 miles before turning and coming back along country lanes to Blacon/Saughall and then back up into the Town Centre for the big finish outside the Town Hall.  The course is great for a PB, as the return leg is marginally downhill and there’s only one real slope to worry about, being the run back up into Chester.  This is actually a real killer after 12.5 miles, but it helps being able to hear the finish.  I’m not sure about Mr Feakes’ idea of positioning himself on that slope with a camera – we may have to have a talk about that Dave!

Results for those listed as Helsby Running Club are below:

As you can see, I’ve finally nailed 1:30!  I had a perfect run on a perfect day after perfect training.  My only problem on the day was a fear I was going too fast as split after split showed I was way inside my target 6:45 pace and I tried slowing down but the clock kept telling me I was still flying.  The champagne tasted great in the afternoon!

PS – As an interesting side-note, there’s a remarkable similarity between Gun Positions and Chip Positions for us all, we must have stood in the right places at the start!”

There’s a few other names I need to add as they don’t appear as Helsby in the results. A good run from Tom De Jong after a week of two fell races saw him come home in 1.42 (something) but I’m not sure what name he was running with. Ben was 3481st in 1.56.04. Great stuff from Ed joining the sub90 club

For full results and photos of the Chester Half, check out the official website below:

Further afield and also on Sunday saw Jayne Joy win her first International race.  This was part of a fabulous training weekend in the Pyrenees with the talented and famous 80’s marathoner John Boyes.  Hopefully more information will follow. A link below shows some information on the training weekend but a full race report will follow in time. (Great idea to organise a future training week with mountain or trail race thrown in at the end? Lots of opportunity to bike some of the Tour de France routes too)

Many thanks to Kath Boyes for the photographs of Jayne collecting her prizes, very spoilt at a race win in France!

Jayne with a wonderful array of prizes from the Tarbes 10k, France

Please note that there is a local multi-terrain at Thurstaston on the Wirral organised by Pensby on Tuesday 14th May. This is a great trail race on beach and along the Wirral Way at a distance of 10k. Start is 7.15pm at Wirral Country Park but there will also be car share from the club with a meet time of 6.15pm.

Once again, thanks to everyone providing me with reports, photos and results as it really helps in concatenating these emails. If i’ve missed anything let me know as I can always update the blog as needed. 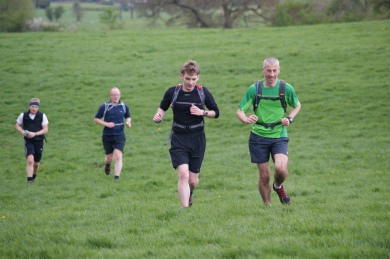 Wow, what a day! Just a quick note to say thanks all for everyone that walked, ran, volunteered, photographed, cheered, baked and turned out. Andy Robinson and his team did a fantastic job and I’m sure you’d all join me in congratulating him on another superb event.

Loads of pictures from the day on http://www.flickr.com/photos/runhelsby

Go here for the results

Thanks to Ben for the picture

Leave a comment and let us know how your day went!