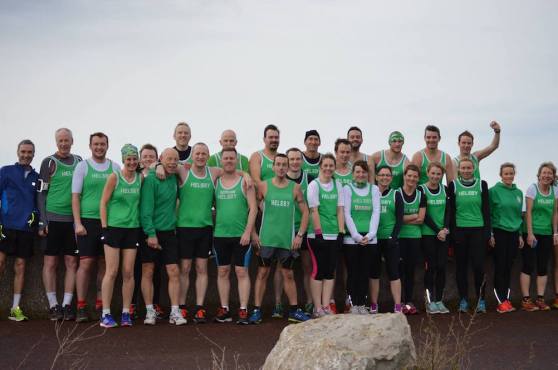 Welcome to the weekly round-up. The main event this past week was Race 4 of the Borders League with a fantastic turn out of green vests. So straight over to Chris Fitzpatrick, our Borders League Co-ordinator, for a race report:

“30 of the green army travelled over to Abergele for the 4th borders league race of the season, and both men’s and women’s teams needed to put in a good performance so they could live to fight another day in the top division. Now unlike the freezing temperatures of the weekend before it was almost tropical down in Abergele although the wind which was right into our faces for the first 2 miles was hindering any PB’s, although because it’s and out and back course a lot of us thought the wind might carry us home, how wrong we were, as it decided to change to a side wind on the way back, you know us roadies don’t like wind and hills! After the first 2 miles you go up a steep hill and into a caravan park, which was proper weird, we did a few laps of a caravan or 2 and then decided to turn around and head home. It was a really strong field as always so competition right through the field was fierce all the way to the finish line with some really brilliant performances and a few PB’s to boot. Great to see Adrian back running as well welcome back mate and good also to see a few new faces running there first borders for Helsby, well done Mark and Adele

El Capitano was first home for the men and Flo Jo first for the ladies. Can I say a massive thank you to all the supporters out on the course as well, few injuries and people feeling under the weather did not stop them coming down and cheering us all on, it’s very much appreciated.”

Thanks for the report Chris, and your rallying of the troops. The results have now been released. Helsby’s current standings in the men’s and women’s 1st Division reflect a great team effort, and we also have a number of people really making a mark in the individual categories. Well done everyone.

Despite the phenomenal turn out at the Borders League on Sunday, we had no less than 12 athletes participating in various Parkruns on the Saturday.

Widnes Parkrun was popular with Helsby this week where Colin Bishop finished 2nd overall – well done Colin. And congratulations to Rachael Holden on her new PB at Widnes. Whilst over at Delamere there was also some great running with PBs by Neil Hughes and Ryan Cash.

Helsby’s consolidated Parkrun results can be viewed at:

Four (or five!) of us did the Ashurst Beacon fell race on Saturday – just up from the Beacon Park xc course. Tim Palmer led home the charge (not counting Jamie Dowdall in his Darwen yellow) with Steve Riley, Janet Robertson and Chris Hatton braving the mud on a deceptively tough course. More trail race than out and out fell territory but lots of mud and a grinder of a 2 mile climb out from the valley to finish at the Beacon summit. Nice event.

Wednesday 27th January 2016 Helsby RC 10k Time Trial – meet at Helsby Sports Club at 6.30pm – don’t forget to keep safe and wear your high-visibility vest if you have one.

Please keep the reports coming in to: